Bob and Chris started at ~8am with Gary following at 12pm. The weather was more reasonable than 2019 with sunshine and scattered showers. Bob and Chris met at Braemar for fish and chips from the Hungry Highlander. Chris continued on to the long route through the night with Bob taking the regular route and camping by the new bothy in Glen Gairn. Gary was making good time and continued through the night, finishing around 9am to set a new fastest time for the short route. Gary and Bob overlapped throughout the morning and finished around 2pm.

The 2019 group start was held on Saturday the 29th of June but heavy thunderstorms meant that the 3 starters abandoned the route at Ballater.

2 riders started at 4.10am aiming for an early start and finish with 3 riders starting at 8am. Trail conditions and weather were a mirror of the 2018 conditions with fast going on the trails. 2 riders dropped out leaving 3 finishers. 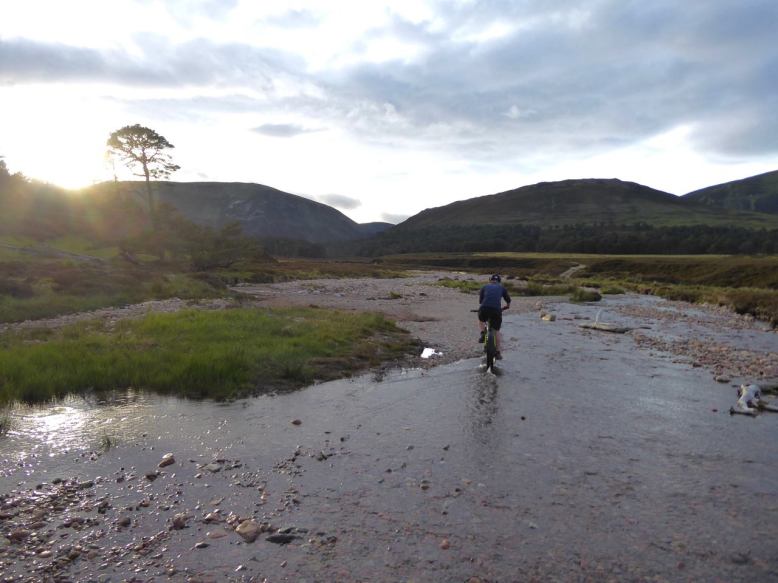 3 riders started the group start on Saturday in fine weather with a strong headwind to Braemar but also a tailwind back.

The trails were dry, fast and in great condition with minimal vegetation, ticks and midges for once. The long daylight hours allowed the riders to ride late with only 4h of real darkness

The finish times are listed below with a flyby of the weekend on Strava.

4 riders started the Deeside Trail in Banchory at 8am on Saturday the 4th of September.

Howard, Bob and Anita at the start

The riders stayed together until the top of the first climb at Scolty Hill where the descent split up the group. The early grey weather soon turned fine, giving great views over Deeside as the route passed Glen Tanar. Adam and Bob ended up riding together at a similar pace with Adam climbing faster and Bob descending faster to balance things out. Anita started well but dropped out after 25 miles, admitting that a busy week leading up to the start meant she couldn’t be fully prepared. Howard was similarly just back from abroad and nursing a dodgy suspension pivot which didn’t help for the technical singletrack sections.

Climbing out of Glen Tanar

Ground conditions were dry making the singletrack descents and climbs fast with Bob and Adam reaching Braemar at 5pm as the rain started. An extended fish and chip stop saw the rain stop by 6pm and they continued on in the twilight until about 9pm at top of Glen Quoich where Adam stopped and Bob continued into Glen Gairn until dark. Howard stopped in Glen Lui as darkness fell and was off before 6am into the technical ground which was made trickier by rain overnight. Bob left with an hour’s head start on Adam which he held throughout the morning as the cloud cleared to leave another fine day. 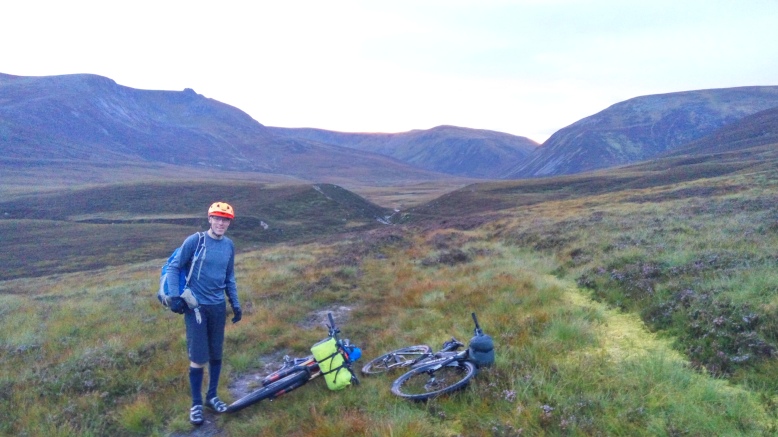 Dusk near the top of Glen Quioch

Adam dropped out late morning when his seat tube snapped on Morven leaving him with a long walk to Dinnet for the bus back to Banchory. This left Bob as the clear front runner and he managed to stay ahead of the heavy showers over Tarland, finishing at 4.11pm with a time of 32h 09m. Howard was less lucky with the rain making ground conditions tricky but he continued through the evening and the late night mist to finish at 10.43pm with a time of 38h 41m, claiming the title of oldest finisher at 54.